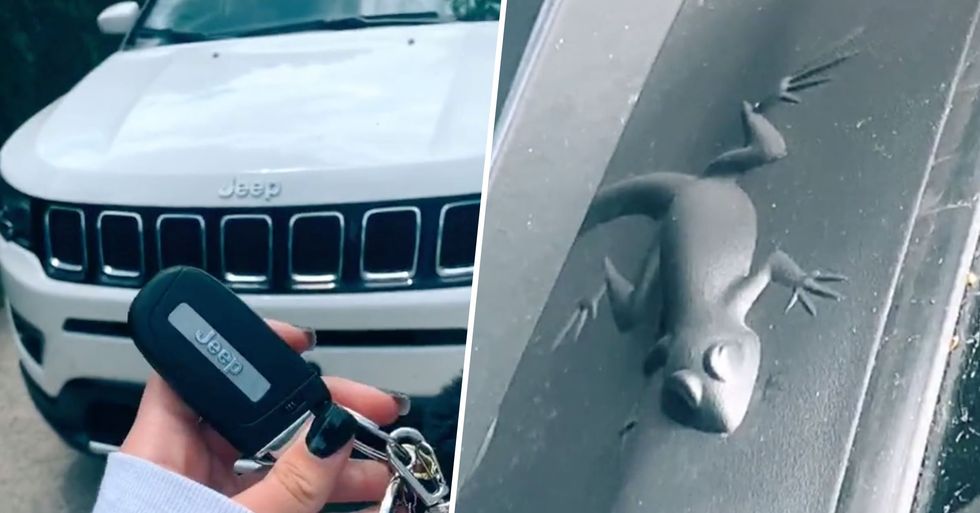 Prepare to have your mind blown.

Apparently, all Jeeps have "Easter Eggs" hidden somewhere on the vehicle and after seeing people share theirs, we're going out to look for our own!

Read on to see some of the most amazing discoveries...

A recent trend on Tik Tok has us all running out to check our cars...

For those of you that don’t know, Tik Tok is an iOS and Android app made for creating and sharing short lip-sync, comedy, and talent videos.

And within a few years, it has become one of the world's best-loved apps.

While we’re all stuck inside because of the pandemic, many have taken to Tik Tok in order to keep themselves entertained.

It's given us some pretty hilarious trends.

From The Doja Cat Challenge to the Fake FaceTime Call, we just can't seem to get enough.

And it's also helped artists go viral too.

The music at the back of Tik Tok challenges have well and truly become hits in the charts, giving way to new and upcoming artists.

Some trends have not been so great...

Even though some of its viral trends, such as The Skull Breaker Challenge, have been hailed as stupid or dangerous, others have provided us with hours upon hours of quality entertainment.

But overall, we're totally here for it.

And the latest trend involves some very detailed detective work.

Jeep (via Buzzfeed) recently announced that they have hidden "easter eggs" in all their vehicles.

That's right, apparently, all their cars have a hidden-but-not-so-hidden image etched somewhere.

And they are all weirdly wonderful...

Keep scrolling to see some that people have found and shared with us.

It was on his fueling tank and wanted to share the discovery with all of us.

S*** hit the fan immediately as everyone who has a Jeep went to do some detective work of their own and you'll never believe what they found...

This user found a truck on all her wheels.

This one was a difficult one to spot!

Is this some weird inception that my eyes can't handle?

Apparently, this feature is hard to spot because it only lasts a second before it's gone.

Someone else took the game a little too literally.

This Tik Tok user found a very realistic looking lizard on her windshield.

@jazzy._.boo found so many little "easter eggs" on her vehicle, but this one was probably one of the weirdest.

Another Jeep within the Jeep? We love it!

If you haven't found one yet, I hear people are sharing hints online so you can try asking...

Or just go around again but with a magnifying glass.

If you want to read more about weird Tik Tok trends, then keep scrolling...

i never realized these were easter eggs?? #fyp #jeeprenegade

These moms decided they were going to flash their breast-feed babies and the results were hilarious...